Microsoft Teams Call Quality – How To Ensure The Best Experience 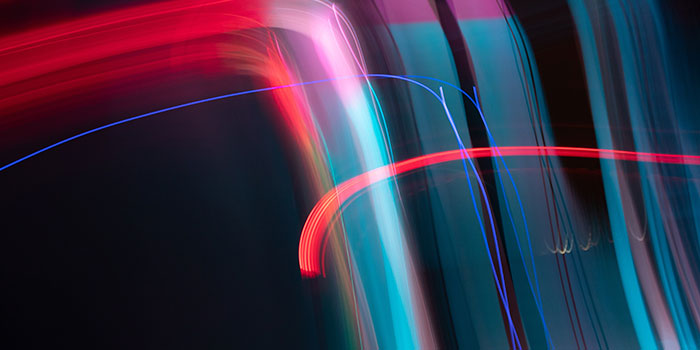 Have you ever been on a Teams call and heard the garbled robot voice or experienced choppy video?

Or do you regularly get the dreaded message: “Your network is causing poor call quality”?

There are a few reasons why these things occur. And none of them are down to Teams itself.

Let’s drill down into each scenario.

The most common cause of poor Microsoft Teams call quality is packet loss.

When you make a Teams call your audio, video, and screen sharing are sent over the network as streams of network "packets" - hundreds every minute.

If something on the network is bad, some of these packets may get lost along the way, or get delayed so much that they can't be used.

For example, a network switch or router may be failing, or a home worker sharing the Wi-Fi with family who are streaming video or playing online games.

Packet loss is usually expressed as a percentage of packets that don't reach their destination in time, or at all.

You may experience packet loss if a network is too busy (too many people trying to use a limited amount of bandwidth), network equipment is malfunctioning, or the signals used for Wi-Fi or 4G are poor.

Teams and Skype for Business record the average and maximum packet loss on a call, along with lots of other data.

This can be accessed by administrators via the Teams Admin Center or in reporting software like Nasstar’s Teamwork Analytics. 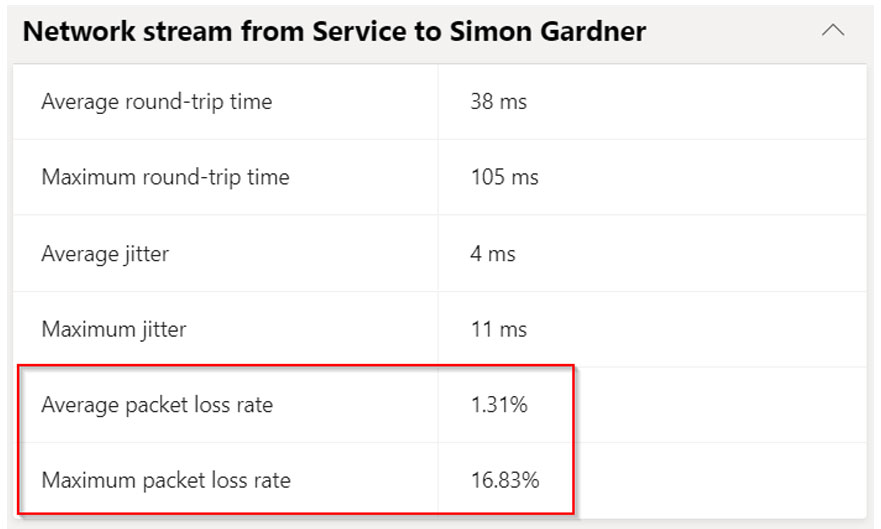 What happens when we get packet loss?

Upon investigating the user experience with packet loss, we ran tests using a looped speed sample on one PC, making calls to a second PC behind a WAN emulator that could simulate packet loss for us.

How high does it go before you notice a problem? 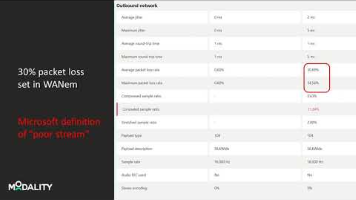 At low levels of packet loss, Teams is good at dealing with the issue.

The Team SILK codec uses techniques such as forward error correction (sending extra packets in case some get lost) and concealing lost packets by smoothing over any gaps.

When you start to hear or see issues, this is when there isn't enough information arriving to reconstruct the stream.

Once that capability is used up, Teams can't fully hide the problem. This is when you start to hear audio artifacts like robot voices and start to miss words and meaning.

Of course, in the real world we don't get consistent packet loss. It tends to come in short bursts that can have 40% or more of packets lost for seconds at a time.

When your Microsoft Teams calls drop, this could be down to severe packet loss, causing the stream to stop completely.

On corporate networks, this can also be caused by incorrect firewall configuration.

If firewalls don’t identify Teams calls correctly, they may classify it as suspicious and stop the network stream.

This is particularly frustrating as people have to call again or re-join a meeting and lose time while they catch up again.

If you're making a Teams call and want to give your network packets the best chance:

If you're a Teams admin:

While audio is most sensitive to network issues such as packet loss, it affects video too.

You may notice video freezing, becoming blocky or choppy.

Following the steps above will assist with both audio and video quality in Microsoft Teams.

In the near future, the Satin codec will help audio quality in Microsoft Teams.

A new audio codec is coming to Teams called Satin, an AI-powered codec designed for challenging network conditions such as mobile data networks or busy Wi-Fi, which can be prone to high packet loss.

Because it is so efficient at sending audio in fewer packets these can be duplicated if conditions are difficult, giving a better chance that lost packets can be replaced, without anyone noticing.

You can check whether your network is fully optimised for audio and video calls using the Microsoft 365 network connectivity test.

While it tests for more than Teams, if you go into details, it shows how well your computer and network connection performed against the Teams service. Any red marks on this section would be worth investigating – you may need to work with your IT or network teams to find out what the issue is.

Teams is better than ever at dealing with packet loss on the network, and improvements are coming to help further.

It's always better to keep packet loss as low as possible, to give some contingency for when conditions are poor.

If you are responsible for the quality of Skype for Business or Teams calls, Nasstar can help.

Whether it's helping to plan for a future rollout, troubleshooting issues you have or using our reporting software to identify problem areas before end users complain, Teamwork Analytics helps across the board.