For the past decade - as long as Nasstar has been a part of the AWS Partner Network (APN) - the AWS global cloud community has come together at re:Invent to meet, get inspired, and rethink what's possible.

This year, the largest, and most comprehensive event in cloud computing comes to Las Vegas. The best and brightest from across the industry will share the latest insight and innovations, and attendees will learn how to transform and optimise their businesses ready for the challenges ahead.

Nasstar’s AWS Ambassador and AWS Technical Practical Lead, Jason Oliver is here to take you through the highlights from this year’s keynote from Peter DeSantis.

A ‘peek under the hood’

On Monday 28th November Peter DeSantis, Senior Vice President of AWS Utility Computing, took to the stage at Las Vegas’s Venetian hotel, to offer attendees an exploration into how the hyperscaler continues to push performance boundaries in cloud computing.

Peter provided a glimpse of how AWS is engineering novel solutions across silicon, networking, storage, and compute without compromising on performance, sustainability, or cost.

As a technologist with a long history in IT, I thoroughly enjoyed this keynote. Peter provided the audience with insight into how AWS builds its core platform attributes: security, elasticity, performance, availability, cost, and sustainability. Each of these is fundamental to how we develop and manage services on AWS.

The latest version of AWS Nitro, dubbed ‘v5’, comes with twice the computational power, 50% more memory bandwidth, and a Peripheral Component Interconnect express (PCIe) adapter with twice the bandwidth. With general availability (GA) from today, this latest version provides significantly improved performance, supporting a 60% packet per second (PPS) rate, with a 30% reduction in packet latency and 40% better performance per watt. 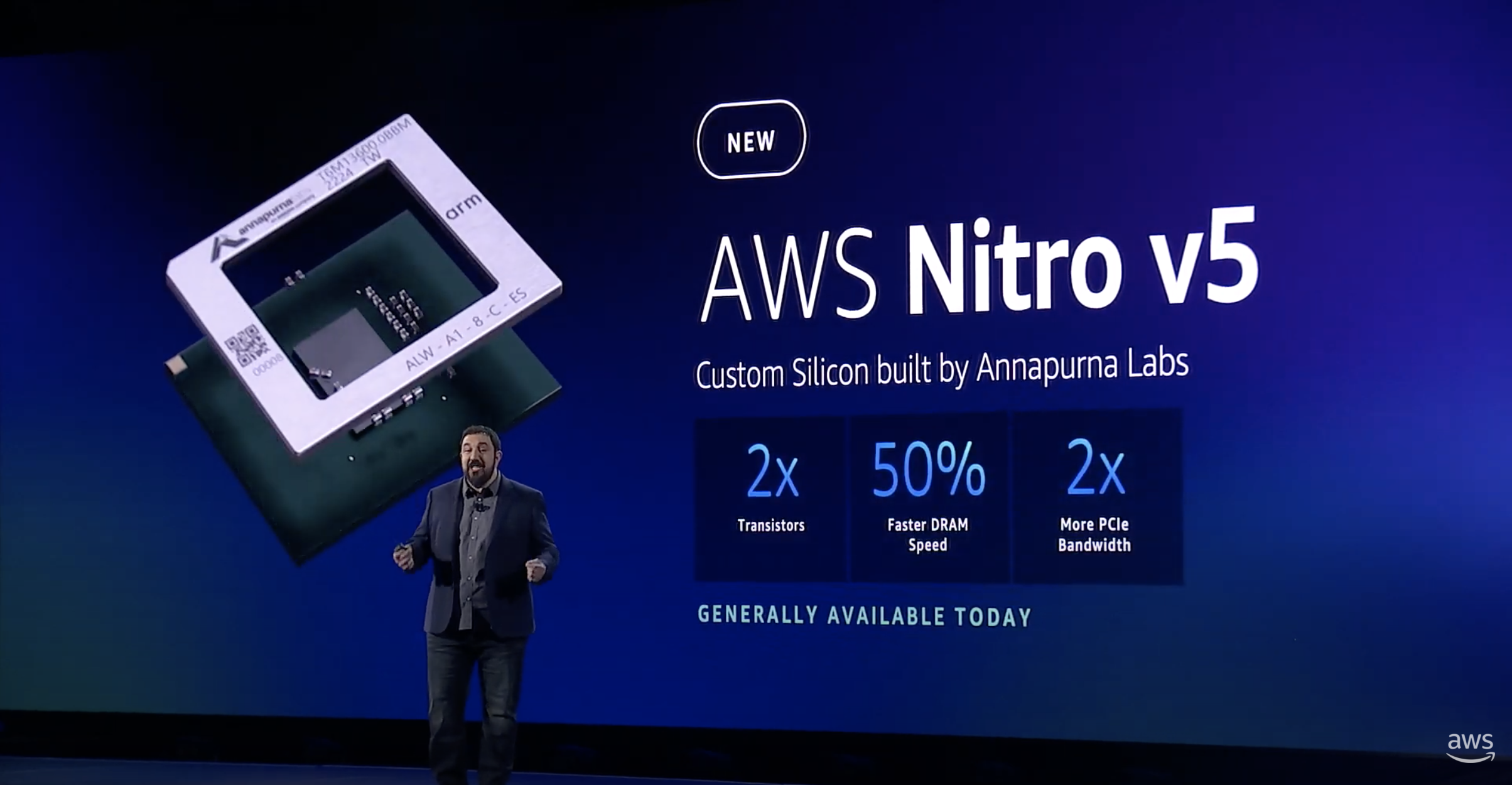 Peter also announced a new Amazon EC2 instance type called the C7gn, which leverages this new architecture. It offers 200GBps network bandwidth and 50% better PPS so it will be ideal for high-performance computing (HPC) workloads such as weather forecasting, life science, and industrial engineering.

A new Graviton variant, called Graviton3E, was announced too. It has improved HPC performance through better floating point and vector math performance, a 35% improvement in HPL (a computational benchmark for algebra), a 12% improvement in GROMACS (a molecular modelling library), and a 30% improvement in common financial options models. 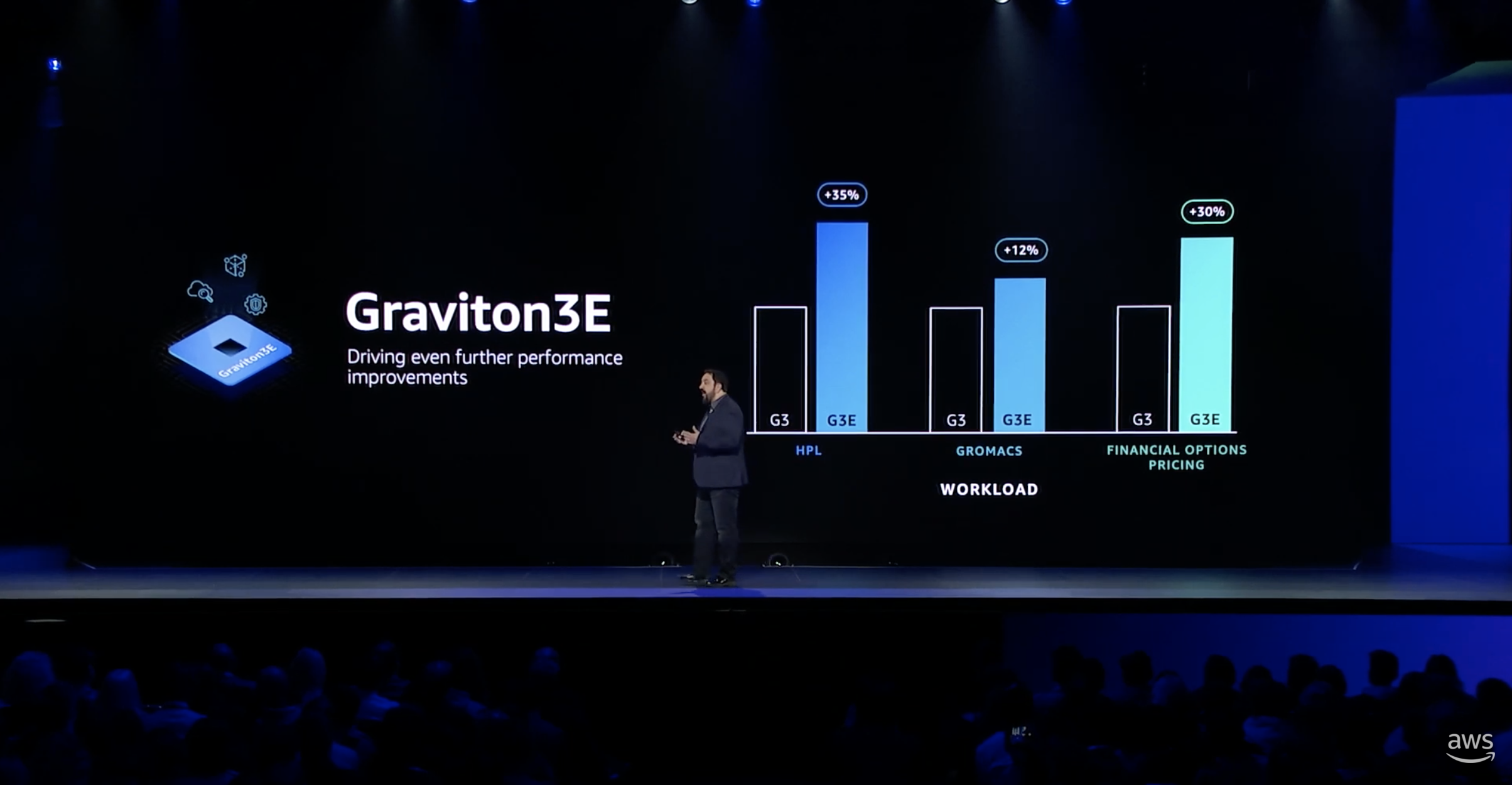 These three innovations converge with the introduction of a new EC2 instance called HPC7g.

With my environmental and security hats on, what astounds me is that all this performance is possible without compromising security and while reducing power consumption - a technological marvel!

After all that excitement, Peter moved on to networking. He shared how AWS has completely redesigned the traditional network topology, moving from oversubscribed networks to densely connected multi-path networks. AWS is removing Transmission Control Protocol (TCP) and replacing it with its own AWS Scalable Reliable Datagram (SRD) protocol. These changes provide lower latency and the highest throughput from the AWS network. 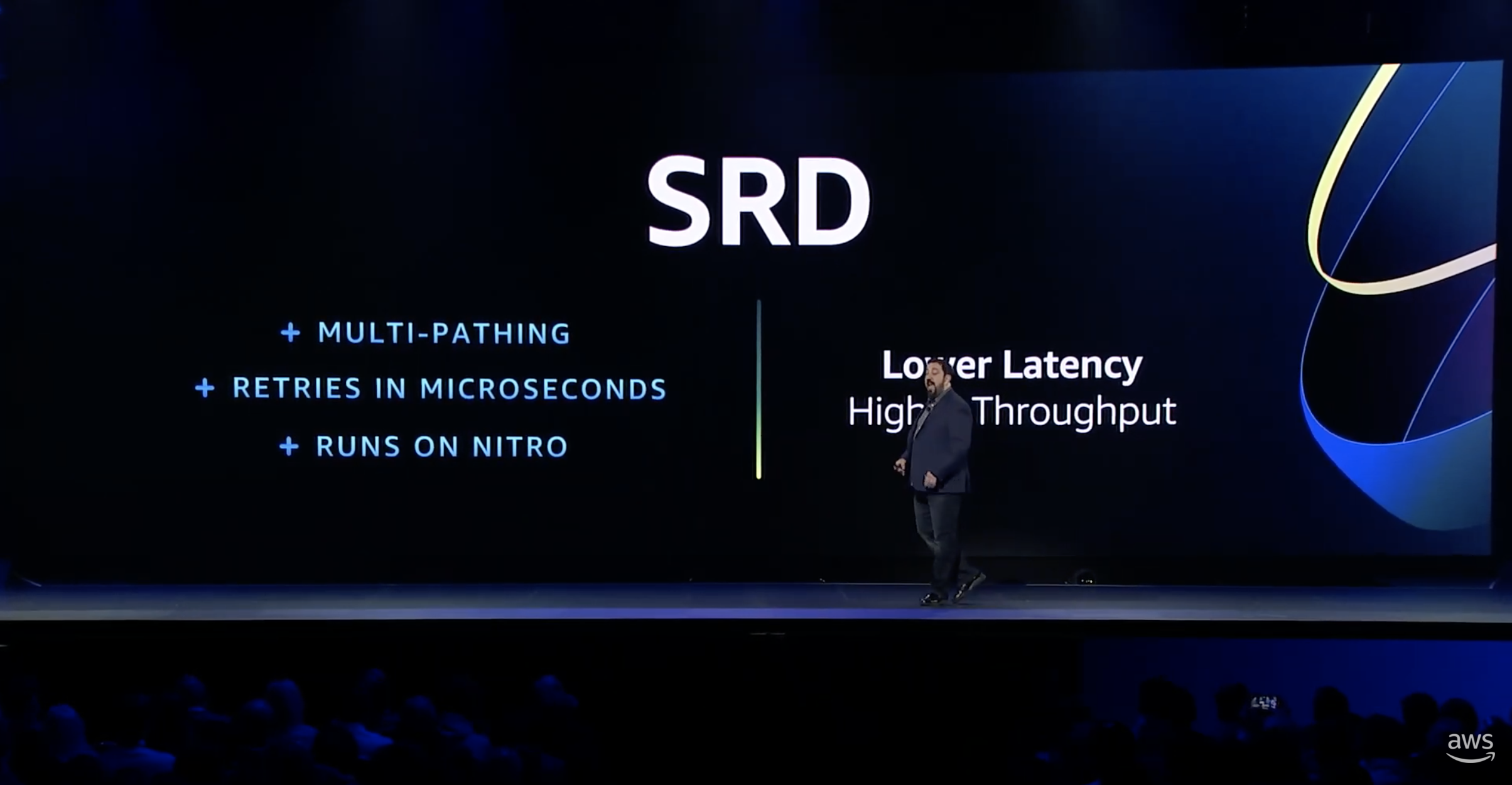 An unexpected outcome of this HPC-focussed innovation is that more common workloads will benefit in the following ways:

I expect SRD to become even more intrinsic to the AWS platform as time goes on.

As the demand for complexity and scale of training models increases, so do errors. 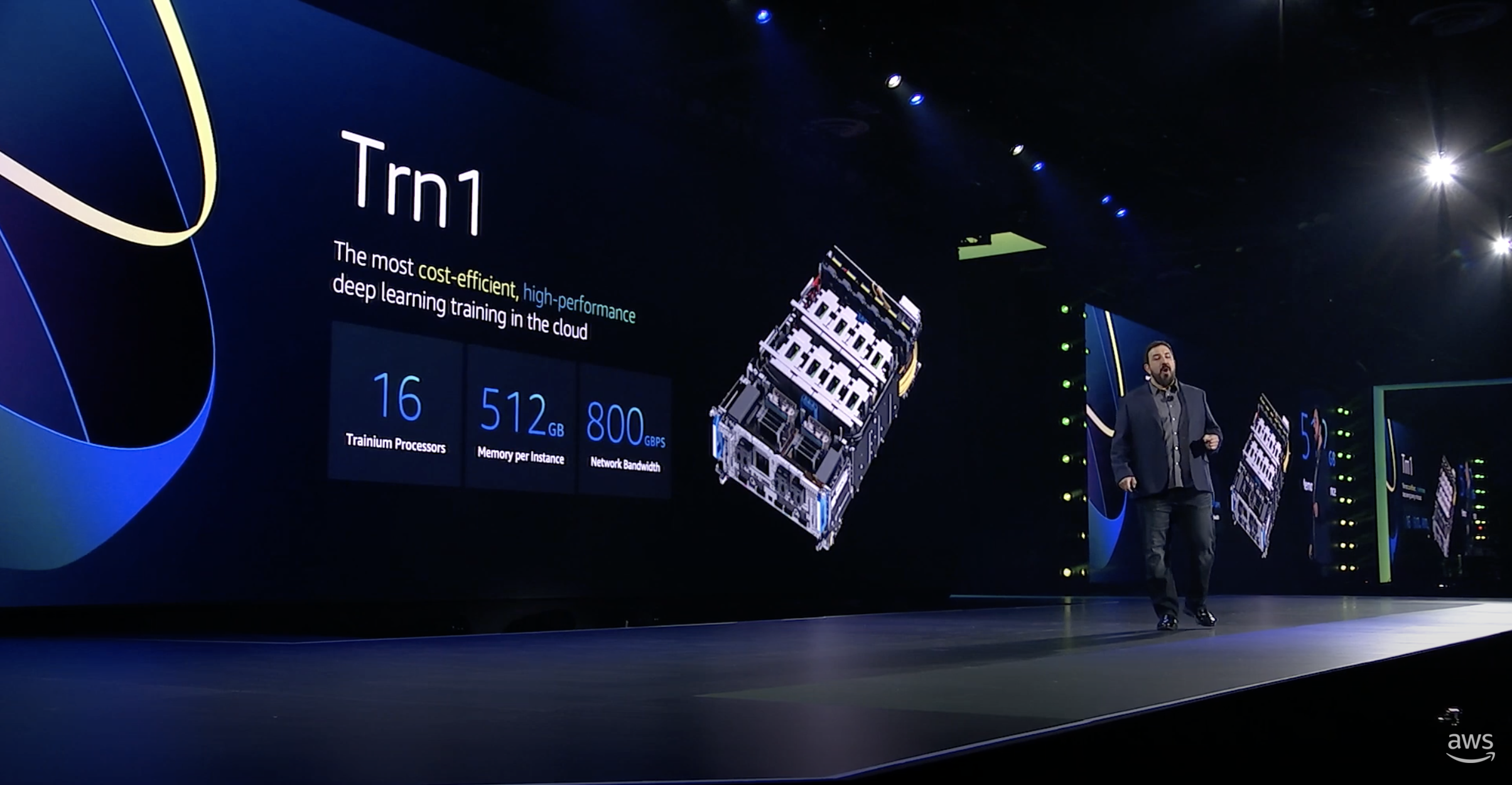 Next, we got a peek behind the scenes at how AWS Lambda operates with cached applications, and cache hits and misses. And how to minimise the impact of cold starts caused by those cache misses. We saw that using a larger cache would reduce cold starts by 50%, which AWS’s Firecracker helps address through smaller micro functions.

AWS Lambda SnapStart was also announced - GA today. At no additional cost and with minimal code changes, this feature greatly reduces application start latency. I imagine this will have a significant impact on larger runtimes and functions.

The evening finished with a topic we are both passionate about…sustainability.

Improving efficiency is ingrained in every single aspect of AWS’ infrastructure. In terms of products, AWS Graviton continues to achieve 60% more power efficiency for most workloads, while AWS Inferentia remains the most energy-efficient inference processor.

Amazon has committed to powering its global operations with 100% renewable energy by 2030. It’s now on track to accomplish this by 2025 – incredible!

Since last year, Amazon has announced another 3.6 Gigawatt of wind and solar projects. Most recently, it revealed another 18 renewable projects totalling 2 Gigawatts across the US and Europe. In total, Amazon has built 12 Gigawatts of renewable capacity. When all these projects come online, they’ll save an estimated 13.7 metric tons of carbon emissions. That’s the equivalent of nearly 3 million cars in the US each year.

As someone who recently invested in their own solar hybrid system, I was blown away by the announcement of a Utility-Scale Energy Storage system for AWS to produce, manage, and utilise renewable energy 24 hours a day.

Amazon has once again demonstrated why it’s an industry leader while showcasing the art of the possible. I’m excited to hear more from the executive speakers as they dive deeper into new products and services in the coming days.

Keep an eye out for our next blog featuring even more highlights from AWS re:invent 2022.

Jason Oliver is an accomplished AWS ambassador, technical practice lead, principal Cloud architect and builder with over 25 years of transformational IT experience working with organisations of all sizes and complexity.

Jason is an SME in AWS, Azure, and security with strong domain knowledge in central government. He has extensive knowledge of cloud, the Internet and security technologies in addition to heterogeneous systems spanning Windows, Unix, virtualisation, application and systems management, networking, and automation.

Jason is also an author, digital music producer, and a black belt and instructor in Karate.